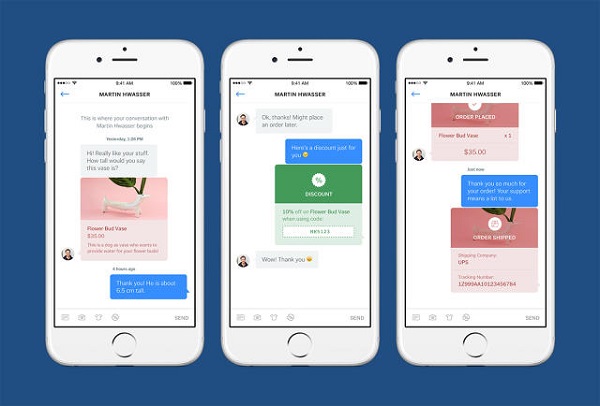 Messaging applications have become essential tools for all mobile consumers: practical, immediate, free, all advantages in its use. But this is even more true of the younger, who have almost completely abandoned and other channels such as email, while increasingly invest time -for not say all the time – in applications such as Facebook Messenger, WhatsApp or Snapchat.

Therefore, if brands want to target this audience, it makes sense to employ those channels in which they are most active: instant messaging apps. So recommends a new article of Jim Tomanchek in Adweek, where mass audiences remember that these apps have been wasted until recently. In addition, do not use the word “massive” lightly; do not forget that the number of users exceeds one billion WhatsApp and Facebook Messenger, 800.

To this must be added the use made of these apps, according to multiple reports: consumers use media messaging applications 9 times a day – compared to 5 times a day the rest of the apps- and the retention ratio the first, a month after being installed, is much higher than the average, 68% from 38%.

The potential of apps for business, therefore, is clear, and gradually, these applications have been taking their first steps to go far beyond simple chat. China’s WeChat, for example, offers many more features, like being able to access entertainment content, order a taxi or pay for products directly through the platform.

Facebook Messenger is also exploring the potential for the company

Since last year, Facebook Messenger can integrate a chat box within the web of companies. Now it wants to go much further by allowing companies can use this channel to send promotional messages.

Specifically, from Facebook it has ads on Messenger and in the second quarter of this year. Of course, companies can only send such ads to those consumers who have previously started a conversation thread, but still it is not known how much work the whole process.

What is clear is that this is a great opportunity for brands, especially for those who want dirgirse to millennials and adolescents. It would be interesting for those brands that begin now to promote the use of Facebook Messenger among its customers. On the one hand, because it is a way to communicate directly with them, offering an immediate and personalized attention, but on the other also in view of future to count and with a broad base of contact accustomed to this way and feel interested users receiving messages. In addition, that, after all, that is where your customers and potential customers are.

It is further expected that WhatsApp is the next to take this step, especially after Facebook CEO acknowledged that it was working on a model accounts to business, which allow users to communicate with organizations from the platform, and receive useful advice through this route.