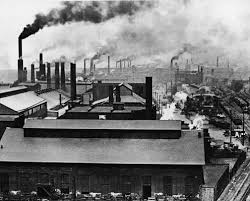 From the start of the 1800’s a revolution began in Britain. It would shape the country in ways that people living through it could not imagine. We are still feeling the effects of it hundreds of years later. Prior to the 1800’s Britain was primarily a rural society. People lived on and worked the land for a lord or land owner. Towns and cities grew from there market status and acted as a support to the distribution of the farming produce.

With the discovery of how to make steel, the creation of the spinning jenny and flying shuttle in cotton and the general requirement of manufactured products to sell to the world, Britons found that the employment was in towns and cities rather than the villages and shires they had known before. In one of the biggest civil migrations the East End of London, and the Cities of Birmingham and Manchester saw the population explode. In South Wales and the North East the need for coal to fuel the revolution saw small villages mushroom into large towns to support the mining work.

Cotton was king in Manchester. Like the Farah Shirts we see today, clothing moved away from the coarse wool to the manufactured cotton. The country was changing a pace with nothing to check it.